As part of their 100th anniversary celebrations The Oxford and District Federation of Allotment Associations have published a book entitled “A Growing Concern. It is available from the Museum shop in the Town Hall, priced £6.00 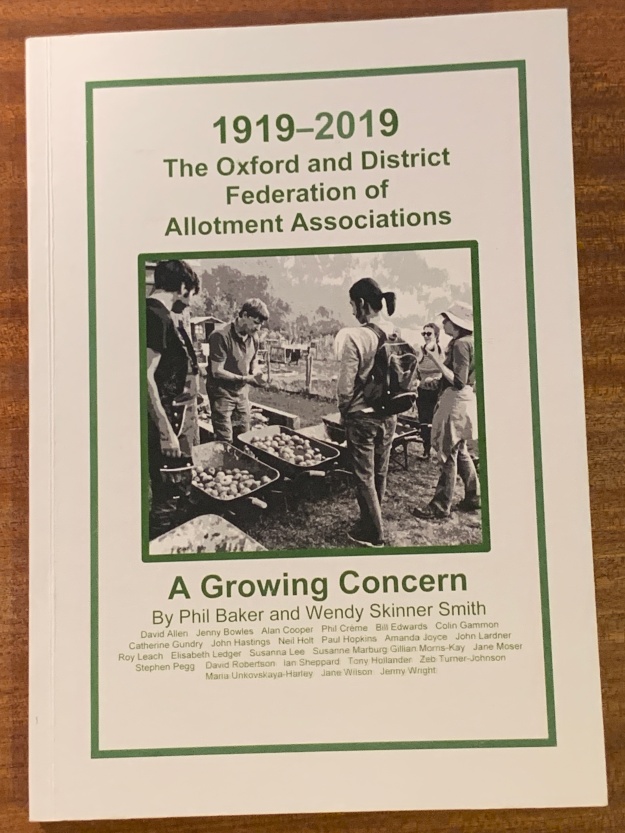 Its authors Phil Baker and Wendy Skinner Smith draw on contributions from the constituent associations; our own Stephen Pegg wrote in the book this piece about Barracks Lane.

Both fields of BLA have been sites of activity since ancient times, with a Roman pottery kiln on the boundary to the east and a late medieval quarry a stone’s throw to the south. The heavy clay, sandier in some areas, has been cultivated or used as a hayfield for centuries; two undated aerial photos show allotment plots extending north up on to what is now the Golf Club and south on to The Spires playing fields, probably because of wartime requirements. Links Allotments (as we were originally called) came into being during World War II then split from Bartlemas Close in 2012, later to create its own constitution and new name.

It is a pleasant very open site of about 4.5 acres and, with college woods, school playing fields and a golf course on three sides, has a rural feel, especially with regard to voracious muntjac, vandalous badgers and the strange scream of vixens late dusk. From a perusal of the records, it is clear that demographics have changed greatly : we now have more single persons, women, young married couples and plots shared by Associate Members. Some changes reflect a general reorientation of allotments to their community – we regularly welcome young children from a local school into a thinly–wooded area set aside for them. Cultivation techniques range from fluttering miles of Mypex to altitudinous raised beds (a 1:15 slope means bottom plots can get very wet after storms).

Following some years of inertia, we are now enjoying a very active period; there is a waiting list and our five or so working parties a year get ‘stuck in’. Projects for this year include a recreational seating area and…The Polytunnel. Standards are high –  though not as demanding as in the 50’s and 60’s when meeting minutes mention posses of committee members visiting prospective allottees at home to inspect the state of their gardens! Notes from other meetings include : (1945) Chairman’s pears have been pilfered (1970) Mr and Mrs F. (who now have the neatest plot on site) sent a stern letter (1985) Mr H. has been found sleeping in his shed again (1990) Committee is not sure whether M. is allowed her geese.

Both ‘A’ and ‘B’ Fields are rich in memories, most of which are passed on between moans about the weather and a cup of tea. The Shed, for example, a big breeze-block affair of the 60’s which stored everything and up to 20 years ago featured the shop selling potatoes, onion sets and bagged-up chemicals (thankfully replaced by organics, bar the odd sprinkle of Growmore) now replaced by The Container, painted a nice shade of woodland green. Some plotholders live on in the folklore: Mary S., who famously found uses for vast quantities of black knicker-elastic (still being dug up) in all her allotment activities; Margaret C., whose love of animals drove her to distraction when a member chased a pheasant intending to impale it with his fork. M.’s sympathies were with the bird. She pursued the Greek gentleman all round the field threatening him with hers. A policeman had to be summoned to convince M. of the ill-advised nature of homicide.

Remembering and celebrating a tradition of cultivation in this place, we look forward to continuing our stewardship.